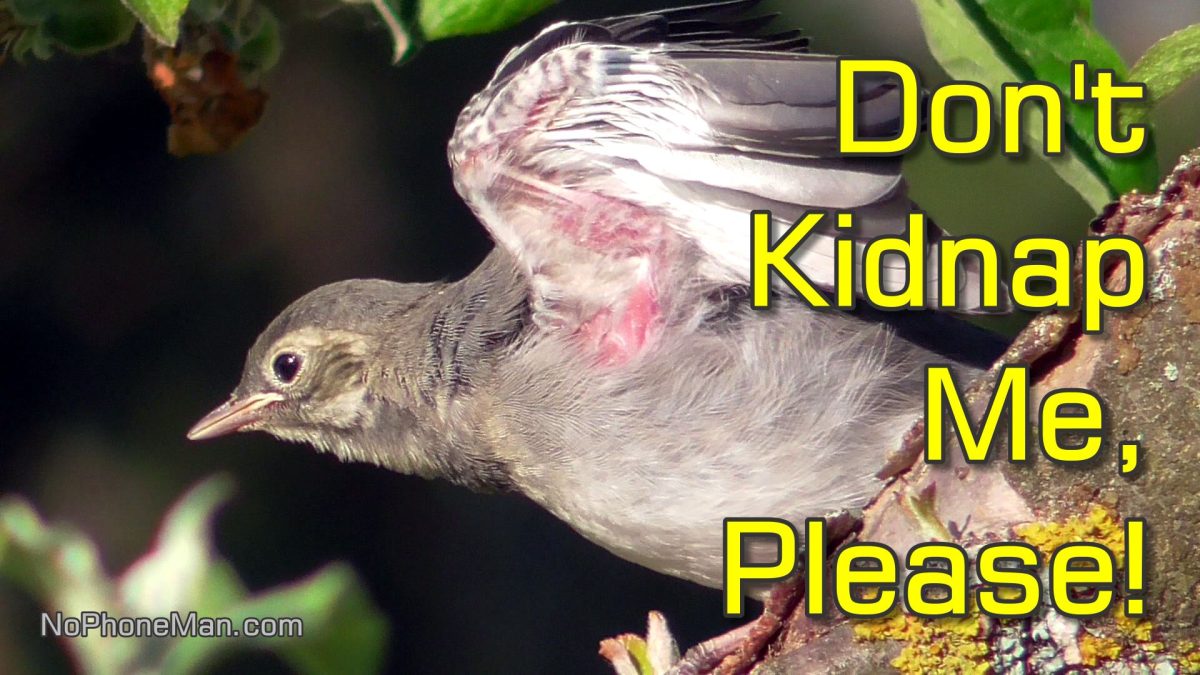 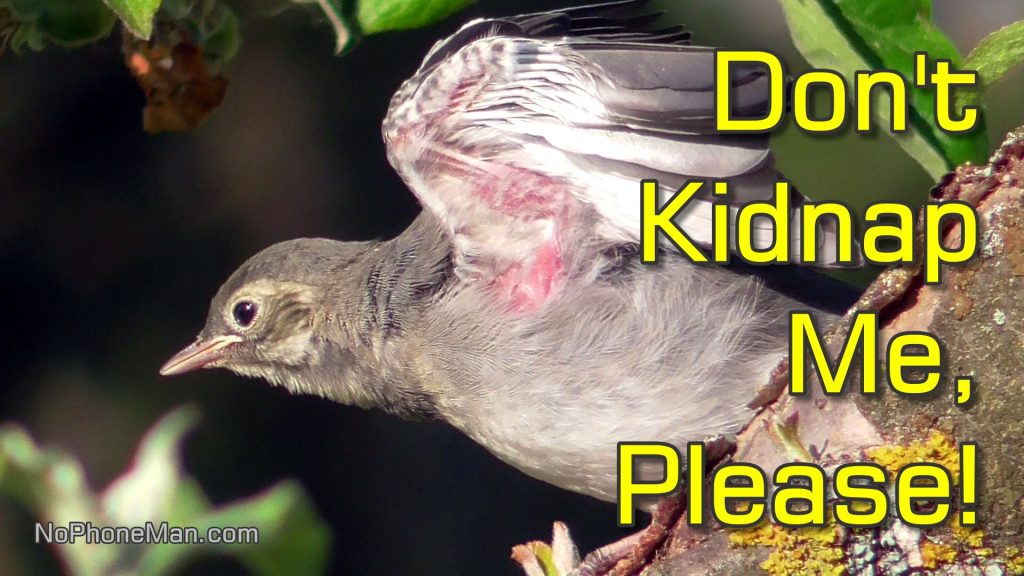 The cute little bird featured in this video is a White Wagtail (Motacilla Alba). Once you start paying attention to how it constantly wags its tail when perched, the reason for the name is clear. This movement is very characteristic of the species, but White Wagtails have strikingly black and white heads. And this one does not. The wagging tail fits, so what’s with the plumage, you may ask?

The reason why this bird doesn’t have his colors yet, is because it’s a Fledgling. A fledgling is essentially a young bird who’s already grown some feathers, but hasn’t yet gained the full ability to fly. It often takes a bit of time for fledglings to acquire colors typical of the species.

What Is a Fledgling?

Like this White Wagtail fledgling, once newly hatched birds grow big enough and fledge, meaning they develop wing feathers capable of flight, they leave the nest to exercise their muscles in order to take their growth to the next level. But even though they’re no longer nest bound, they’re still far from capable of surviving on their own.

For the next several days, usually weeks, their parents will continue to feed them and teach them how to fly. The fledglings will gradually gain the ability to fly independently, but until they do, they remain a vulnerable bird without sufficient experience to run from danger.

When Do Birds Fledge?

In the Northern Hemisphere, most birds fledge in the months of May and June. It is therefore during these months, but also outside of them, because some bird species have more than one brood a year and larger birds take longer to fledge, that we as humans must be extra considerate of our wild feathered friends.

Don’t Be a Wildlife Kidnapper

Unfortunately, it happens all too often that some people come across a fledgling, and assume it’s an injured or orphaned bird. They mostly mean well. I mean… the bird doesn’t take off when they approach it, plus its feathers look loose and messy because it has not reached full adult plumage. So what else could it be, right?

Oh My Gawd, it’s an injured bird. I got to take it in and feed it until it recovers…

Like I said, they mostly mean well, but unfortunately they’re doing possibly the worst thing they can. They think they’re helping the little guy, but in reality, they’re kidnapping the fledgling from its parents before they could teach him to be independent, thus condemning it to the bitter fate and its parents to needless stress and heartache.

Because fledglings are well-feathered as well as mobile, a person who doesn’t know they’re looking at a fledgling could mistakenly, albeit with good intentions, cause serious harm to the wild creature.

What to Do If You See a Fledgling?

As part of their natural learning and growing period, which is very important for their future life, fledglings stay outside of nests even when their parents are out of sight. And they could be out of sight for hours.

The parents are however well aware of their kids and will continue to look after them, feed them and teach them critical skills. Those includes the ability to fly, to vocalize, to recognize and react to danger, etc.

If that happens, the fledgling’s chances of survival rapidly decrease. Therefore if you unknowingly capture a fledgling, it’s essential that you put it back where you took it from as soon as possible. Time is of essence here.

So the basic message to take home is that if you see a fledgling, you leave it alone and stay reasonably far away for the parents to return to it and continue taking care of it. The parents will not come to the fledgling if you, or another person, or a pet, are too close.

When to Help a Fledgling?

In some instances, it is in fact prudent to take action and not leave the fledgling alone. But there would have to be clear signs that your intervention is truly needed.

For example, if you observe a fledgling wander into an area where it faces immediate danger, then the right thing to do would be to pick it up and relocate it to a safer area. Examples are areas with traffic, or yards with pets. But the basic rule that the fledgling has the best chance of survival in the care of its parents, and not your care, still holds true.

Only when there is no doubt that the fledgling’s parents are dead, or if it has visible injuries, for example if your cat brings it to your doorstep in his mouth, or you see it’s bleeding, or has an obvious broken limb, only then it’s right to capture the bird and take it to a professional wildlife rehabilitation center.

If the fledgling is alert and strong enough to be hopping around, then there’s a good chance it’s fine and the best thing to do is leave it. Its parents are likely nearby and will take care of it.

Summary of Info on Fledglings

So to sum it up, if it’s the fledgling season in your area, and the bird you see isn’t readily taking off when you approach, and its plumage seems fluffy sometimes with young feathers sticking out, you may be looking at a fledgling. It may take a short flight, but you can catch up to it with relative ease, and it may even let out a repetitive call. All these are signs of a potential fledgling.

Give this little guy a chance at life and do not kidnap him. Let his parents do what they are best for. Intervene only and solely if the bird is visibly injured, you see its parents dead, or it’s in immediate danger from traffic or pets.

As may be apparent, I love wild animals and I enjoy their presence. And I want them to be healthy and thrive all around me. Only then can I truly enjoy sharing the environment with these amazing creatures.

So for me, respect for the birds and their environment are of the primary importance. In other words, the well-being of the birds and them feeling safe around me are more important than that perfect shot I may get.

Take the footage in this video of the White Wagtail parent coming with food for the seemingly bottomless fledgling. I was well away from the tree on which the fledgling was sitting, and was well camouflaged behind my narrowly opened window. I used telephoto lens and maintained significant distance to allow the birds to behave naturally.

I was fully zoomed in in order to capture the action on my camera when the parent landed on the branch to feed the juvenile bird.

The feeding progressed without issues, but I noticed how right after the feed was passed into the fledgling’s mouth, the parent with the experience the fledgling still lacks recognized that those are human eyes in this little crack behind the window and instantly took off.

I got this one shot, and I got to say it looks amazing, I mean holy crap look at the load of insects the parent captured to feed the young bird. But even though I’m reasonably proud of this footage, after capturing it I realized that by filming it I needlessly stressed the parent out, so I put the camera down, closed the window and moved on to do other things so the Wagtail family can reorganize themselves as they deem necessary.

The fledgling didn’t know I was watching it. It doesn’t have that experience and without it, it didn’t know why it should care. Plus it still can’t fly well enough to take off readily, though it already can get up on a branch and pull off short flights from one branch to another. But the parent knew and noticed very quickly. And reacted accordingly. And this type of knowledge will be passed onto the baby bird, because its survival will depend on the ability to safely and quickly identify potential predators. And most wild birds certainly do, as they should, see humans as potential predators.

So even though you can never be too perfect, my principal rule of ethical bird photography is to make such arrangements as to disturb the birds as little as possible. And that includes the use of a telephoto lens so you can keep a safe distance, and placing yourself in such a spot as to stay as hidden as possible. Not only will you capture the birds behaving naturally if you do it this way, but you will also reduce the amount of stress they are exposed to.

As a wildlife photographer you are a part of the environment, and as such you won’t be able to avoid encounters and disturbances, but so long as you make conscious effort not to put your photography ambitions before the animal wellbeing, then in my opinion you are being ethical.

And that should keep the wildlife around you happy and content, so they can grow and prosper along with you.

I first recorded it along with the sibling on the branch of the tree I see from my window. At that time it could not pull off much of a flight. A few days later, I saw it foraging in the grass alone as I passed by. Now it can pull off a flight of several meters in one go. It’s still far from being independent, but it’s growing to be a healthy and capable adult.

It’s got healthy respect and fear of the people and already works to keep the population of insect pests down. I’m very happy to have it around and I look forward to many more years of his graceful tail wag.