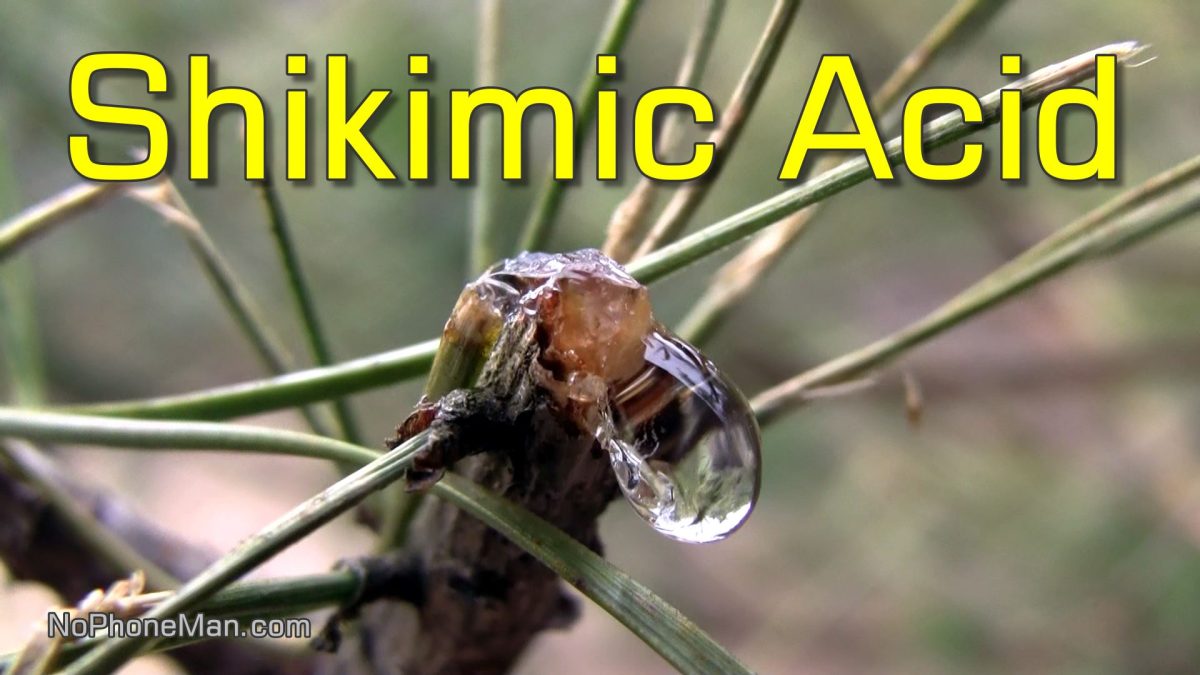 I have a bunch of pine trees growing all around me. Most of them, the ones growing within the woods, are too tall and their crowns are at least a dozen meters off the ground. But the ones growing on the fringes of the forest have their crowns within easy reach and I regularly visit them to harvest some of their needles. In this video I go over the health benefits of the pine needle tea, including shikimic acid, which unfortunately I’m unable to delve deeper into.

Although pine needles have not been extensively studied for their health effects on the human body, some scientific research has been done and the results confirm the medicinal benefits.

For example, a 2014 study published in the Journal of Exercise, Nutrition and Biochemistry showed that pine needles possess anti-oxidative and DNA protective effects.

A 2011 study published in the Farmacognosy Magazine assessed the antidepressant activity of ethanolic extract of Pinus eldarica needles on rats subjected to a forced swimming test. The study concluded that the pine needles extract possesses an antidepressant activity, and confirmed with an open field test that the effect was not based on the stimulation of locomotor activity.

A 2009 study published in Food and Chemical Toxicology found that water extracts from pine needles prevented the cells from oxidative damage, and concluded that pine needles possess a spectrum of antioxidant and DNA-protective properties commonly found in cancer chemopreventive agents.

A 2008 study also published in Food and Chemical Toxicology investigated the protective effects of needles from the Pinus morrisonicola tree on LDL cholesterol oxidation and nitric oxide production in macrophages.

The study found that the pine needles extract may provide protective effects against LDL oxidation and reduce the effect of excessive nitric oxide generation where inflammation exists. Consequently, the study notes, this may contribute to anti-atherosclerotic and anti-inflammatory effects of pine needles.

A 2015 study published in Scientific Reports evaluated the memory enhancing capabilities of pine needle extracts on rats with chemically induced amnesia. The results showed that pine needles extract has an anti-amnesic effect, and suggested that pine needles may be a promising treatment for patients with neurodegenerative disorders, including Alzheimer’s disease and Parkinson’s disease.

All the above mentioned scientific studies are nice, but perhaps the most intriguing compound in pine needles is Shikimic Acid.

Shikimic acid is used as a precursor for the synthesis of oseltamivir phosphate, a primary ingredient in Tamiflu®, which is marketed as an anti-viral flu medicine.

The shikimates are worth taking a closer look at, but this is danger territory so I’m gonna have to leave it on each of you to do your own due diligence on this one.

As far as pine identification goes – the needles of pine trees tend to grow in clusters and have a sheath at the base. Most of the time there are two needles growing out of the sheath, but at times there are more.

Most pine needles are longer than needles of other coniferous trees. If the needles look to be about the length of a finger, you probably have a pine. If the needles are only about half of that or less, and are flat, growing as a single leaf from the base, then it’s likely not a pine.

It’s important to make sure you have a pine, as not all conifers are pines, and some conifers, like yew, are poisonous. Also, it’s possible that some pines growing in your specific area are not safe for consumption, so do consult with an expert to make sure you know which pine trees in your area are medicinal and which are to be avoided.

Other than that, there’s a good chance you have pines growing near you and whereas they don’t shed needles in the fall like the deciduous trees do, once you identify a correct pine tree, the medicine in form of their needless could be available to you year round.

Just be conscious about how many needles you harvest and you’ll have a free and steady supply of Shikimic acid for you and your loved ones.

Other Sources of Shikimic Acid

There is Shikimic acid is star anise and fennel seeds, but there’s a good chance the former doesn’t grow in your area at all, and the latter will require investments in money and labor to reach the harvest day.

Besides, time spent in nature has benefits of its own so a little trip to the woods to get a handful of pine needles can help you on multiple fronts. Soooo… What are you waiting for?

I Talk to Trees

When I harvest from living trees, I talk to the tree and ask for permission to harvest some of its parts. And when I do harvest parts of a tree, I only harvest little so as not to impede the tree’s ability to continue to grow and prosper. Likewise, I don’t use the same tree for harvest over and over, but rather collect from different trees so as not to needlessly stress a single tree too much.

Whereas I live in harmony with nature, I found that the spirits of the plants are happy and willing to offer up their amazing gifts of healing.

As a show of gratitude for their gracious gifts, I frequently return to the trees and bring offerings. I do not pollute the environment, so I only bring organic gifts and mean to give the offering from the bottom of my heart.