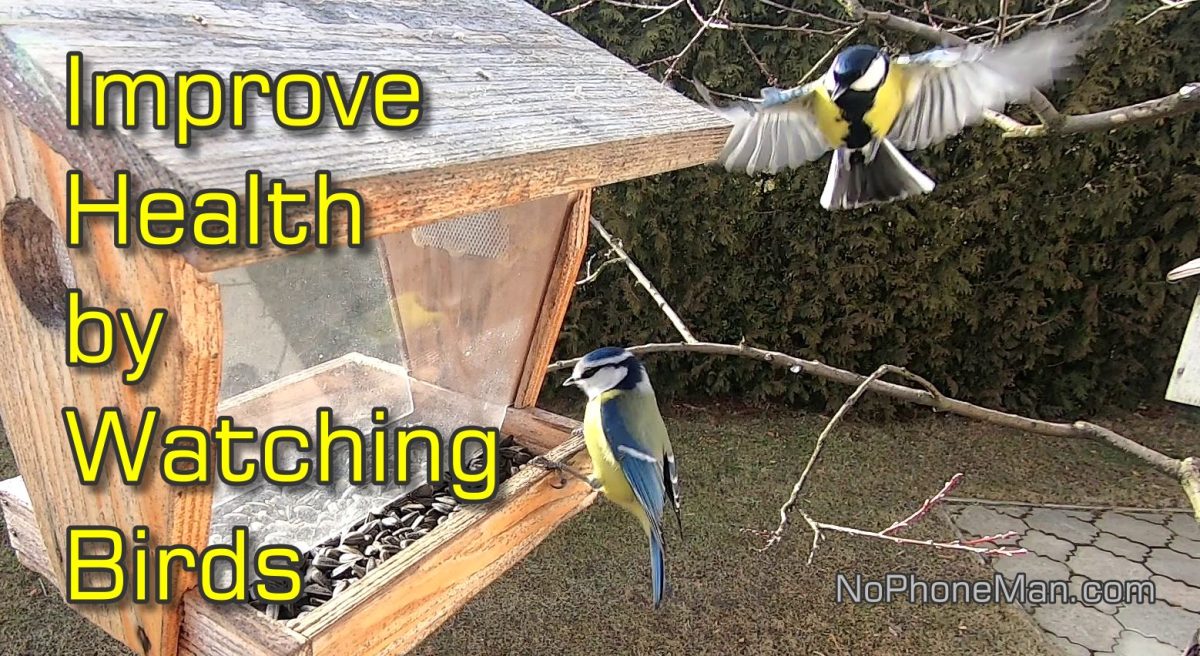 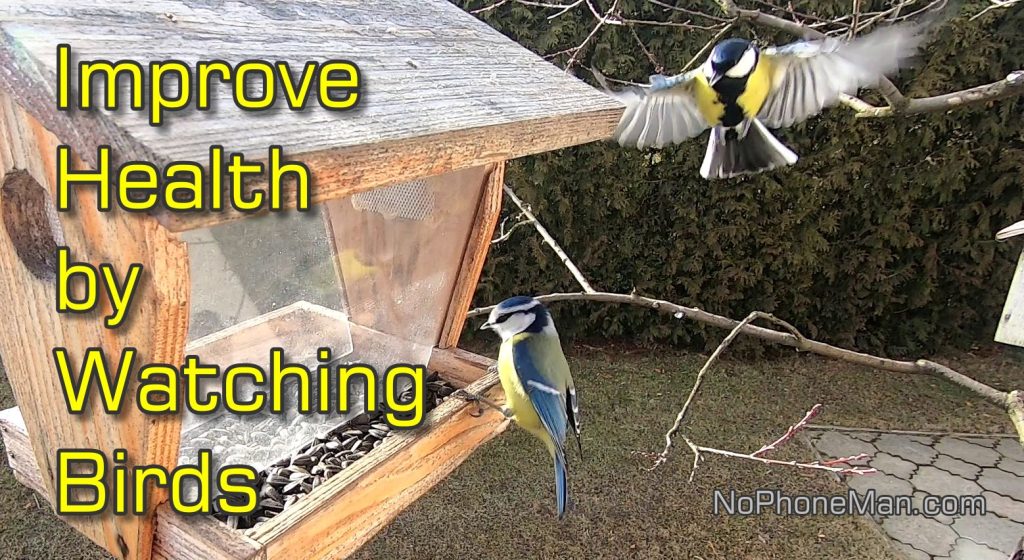 In two of my previous videos I hinted to the fact that birdwatching, or birding as it’s sometimes referred to, has scientifically proven health benefits. Those were the videos about feeding fat balls to the tits and sparrows in winter, and the compilation of the woodpeckers chiseling on trees.

In this video I take a closer look at the therapeutic power of birding and quote from scientific papers which examined the effects of birdwatching on human body.

A good starting point is a research paper published in the journal Bioscience in February 2017 by Dr Daniel Cox and Professor Kevin Gaston from the University of Exeter in the UK.

Titled: “Doses of Neighborhood Nature: The Benefits for Mental Health of Living with Nature“, the research notes that “vegetation cover and afternoon bird abundances were positively associated with a lower prevalence of depression, anxiety, and stress.”

The paper also quotes other studies which showed that having more bird species in the environment and watching birds have been shown to be good for people’s psychological well-being, whereas listening to bird song has been shown to contribute toward perceived attention restoration and stress recovery.

A 2020 study published in the Ecological Economics journal titled “The importance of species diversity for human well-being in Europe” compared the satisfaction levels of more than 26,000 Europeans surveyed on the quality of their lives. The results showed that the more bird species a person had around them, the happier they were. The researchers stated that:

In other words, having more birds around you is like earning more money in what it does to your mental wellbeing.

The researchers however also noted that perceptions of restorative value varied between bird species, and not all bird sounds were reported as effective for the purposes of stress recovery and attention restoration by the interviewed participants.

And I would concur that bird calls of some species, such as the craws, are not particularly soothing for the mind and may in fact have the opposite effect. But the songs or most passerines, which includes all songbirds such as the tits seen in this video, would definitely fall in the category of having restorative value. 60% of all birds are passerines, meaning perching birds.

A 2017 review paper published in the International Journal of Environmental Research and Public Health, titled “A Review of the Benefits of Nature Experiences: More Than Meets the Eye“, looked at a large volume of scientific evidence around the lesser studied sensory ways to experience nature, and that is through sound, smell, taste, touch, and non-sensory pathways.

Some of the findings from other studies included in the review are:

In the review paper’s conclusion, the researchers state that:

We have outlined the evidence that viewing nature both in pictures and through windows can improve health and mood; sounds such as birdsong and nature sounds provide restoration and enhance affect; smells provide numerous physical and psychological benefits; taste affects emotion, and traditional, natural diets have health benefits; petting animals can be very therapeutic; phytoncides can have a positive effect on our immune system; negative air ions affect our physical and mental well-being; and microbiota in the gut and the brain influence each other.

And just to clarify the meaning of the word “Phytoncides“, different part of the review paper states:

Phytoncides are antimicrobial volatile organic compounds emitted by plants typically for defense against decay or attack by herbivores. Phytoncides permeate the air in natural environments, and are directly ingested by visitors to environments containing plants emitting them. They are not smelled or tasted as such, but simply ingested through inhalation. They are a popular topic of study in Japan, and widely believed to contribute to nature benefits experienced during nature walks known as “shinrin-yoku”, or “forest-bathing”.

Forest Bathing is something I am deeply into and plan to make a more detailed video on it in the future.

To top it off, there is even a pre-internet study published in the British Medical Journal as far back as 1979. Titled “Materia Non Medica“, the study notes that “…neither the sentimentalist nor the ethologist would deny that the observation of birds has a real effect on their own emotions. This emotional influence can be turned to good effect.”

The study continues with:

Connie Coke, that chronic depressive character so beautifully described by Normal Collins in London Belongs to Me was saved from suicide by devotion to her budgerigar, as numerous old ladies must have been in real life.

Even in the midst of our most depressing concrete deserts, birds come to the windows and, with a little encouragement in the way of food and drink, a surprising variety will collect. To the depressive or physically housebound, the simple pleasure of watching birds can be an incalculable comfort, while a deeper study of their identities and behavior can add a new dimension to the most despondent lives. As a tranquilizer, birdwatching may be as effective as any drug, but cheaper and safer than many.

As you can see, even science confirms that birdwatching, or time spent in nature in general, can be beneficial to your health and wellbeing. There is even such thing as ornitherapy. Ornitherapy is a word which means “birding for the purpose of reducing stress and illness“. Go ahead and put the word “Ornitherapy” in your favorite search engine to see for yourself.

I myself can attest to the relaxing and meditative power of birdwatching, and I would encourage everyone to take more time off their screens and instead spend it observing wildlife do their thing. Birds tend to be the most accessible wild animals to observe, as even those who live in a concrete jungle can spot a bird here and there.

Granted, some city birds like pigeons are not the most appealing, but even they can help take your mind off whatever lays burdens on it. And if you are stuck in a cubicle or a similar environment, rediscover what you have missed out on by giving your brain a little positive stimulation with a break from its mundane duties, and watch one of my, or anyone else’s bird videos. If I knew then what I know now, I would have included onritherapy into every single day of my life.

You too, allow your weary mind to catch some break and let the sights of wild songbirds feeding on sunflower seeds at my birdhouse chase all your worries away. May the natural activity of the birds sooth your heart and bring you the much needed peace and serenity, if at least for the moment. Kick back and relax. The birds will do the rest. I wish you all peace, love and abundance. May you have the most restful sleep tonight.

The video contains over 18 minutes of wild birds acting birdy. Most of the footage is of Tits feeding on the seeds. The GoPro footage also offers birds in slow motion. My hand held camera cannot record in high frame rate so that footage is at a regular speed. The featured tits include:

There is also footage of Great Spotted Woodpeckers (Dendrocopos Major) chiseling on trees. Furthermore, as a bonus, I have included a few videos of a cute Eurasian Red Squirrel (Sciurus Vulgaris) at the end of the video.

My commentary ends at the 08:18 minute mark. After that, there is no spoken word, just the videos of the birds.

It goes without saying that going out to nature and observing wildlife directly has the most benefits. But if you are unable to go out, then watching birds on a screen is the second best thing. That’s where my video and others like it come in handy. I have put a lot of work into making of this video and the research behind it. I hope you enjoy it and it brings you the desired health benefits.