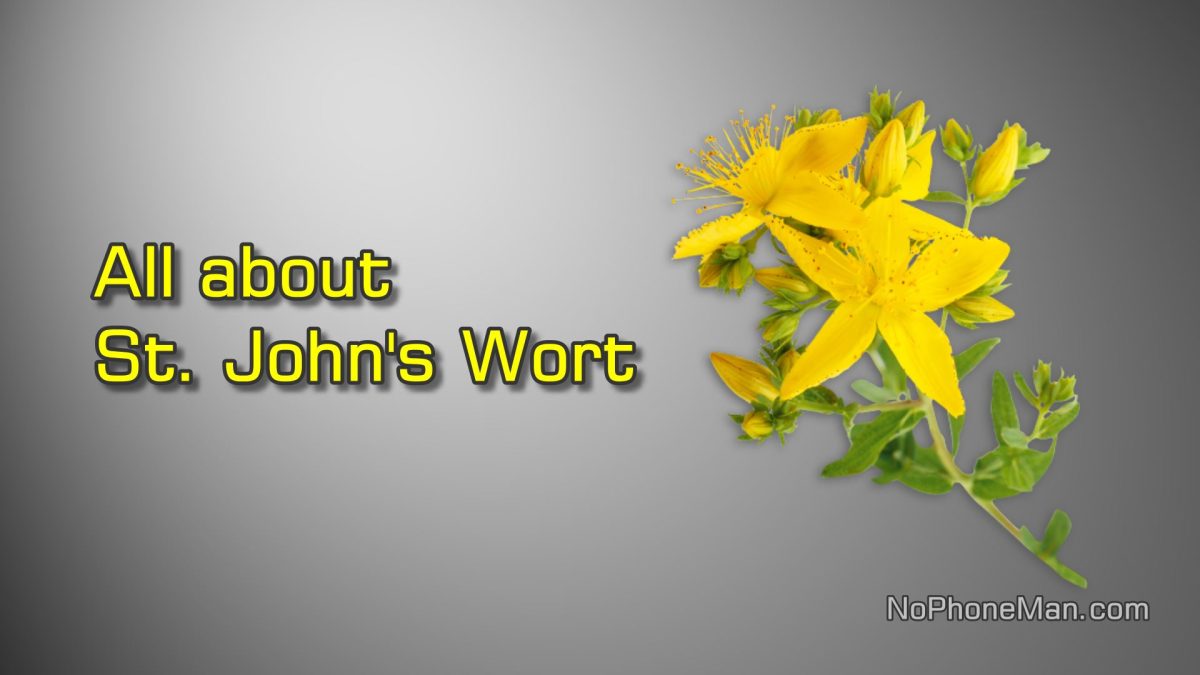 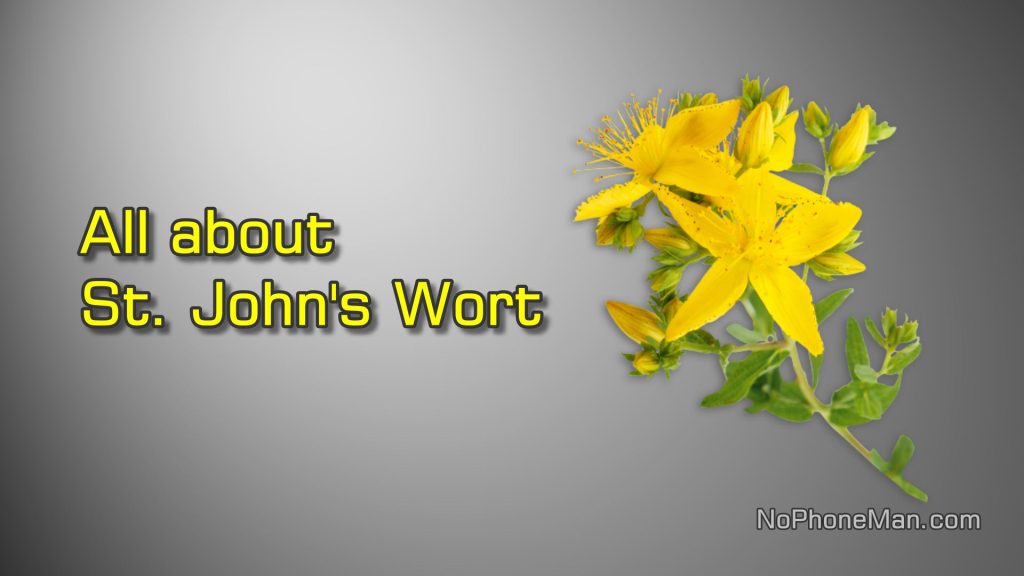 St. John’s Wort (Hypericum Perforatum) is a medicinal herb with centuries of documented use. It is a perennial plant with simple leaves and golden yellow flowers which form rich inflorescences. St. John’s Wort is widespread in Europe, Asia and North Africa.

In contemporary medicine, St. John’s Wort is mainly used in the treatment of depression and anxiety. The main active substances are hypericin and hyperforin.

St. John’s Wort is sturdy, perennial, glabrous herb, usually growing up to the height of 20 to 60 cm. The stem is straight and is quite woody during the season.

The leaves are elongated, ovate or lanceolate, sessile or shortly petiolate, 15 to 35 mm long and 5 to 15 mm wide. The blade of the leaves is smooth. The leaves appear perforated against a source of light.

The inflorescences are rich and relatively freely arranged. The flowers have a diameter of 15 to 30 mm. The crown is golden yellow, composed of 5 significantly asymmetric petals and about 50 stamens.

The fruit is egg-shaped, forming capsules containing many brown to black, small, only about 1 mm long seeds.

How It Got Its Name

In Central Europe, aside from birthdays, we also celebrate name days. Each day of the year belongs to a different name. For example, February 14th is the Valentine’s Day, which means everyone whose name is Valentine, celebrates their name day on that day. Each common name has a day on which people of that name celebrate their name day.

Many names have a traditional saying connected to them. For example, it is said that Martin, whose name day is on November 11th, arrives on a white horse, because on that day, even if it hasn’t snowed before, it usually does snow and the countryside gets blanketed with white snow.

John’s name day is on June 24th, and the old saying has it that it’s the last day of the year when you can hear a cuckoo make a call. It is also on this day when St. John’s Wort begins to bloom, and that is apparently why people gave this herb its common name – St. John’s Wort. The herb which blooms on John’s name day.

Those of you who’ve watched my previous videos know that Wort is an old English word meaning Herb.

Obviously, this year the herb’s bloom’s been delayed by a few weeks. Probably because the winter was unseasonably cold and lasted longer than normal. The end of winter then merged into a severe drought which lasts until now. We’ve basically been for 3 months without any rain. The plant life really struggles this year.

I’m surprised these plants even grow as it’s basically Sahara desert around here at the moment. All these plants have been scorched for months and had nothing whatsoever to drink that whole time. No clouds in the sky. Great if you want to spend your time by a lake, if there’s even any water left in them, but tough luck if you’re a plant.

Somehow they still manage, but Knitbones (Symphytum Officinale) on this meadow are pretty much dead. Last year these plants grew up to my neck, thick as an arm. This year, barely up to the ankle and didn’t even get to see the end of the season.

St. John’s Wort too looks dwarfish and one degree away from drying, but still somehow managed to bloom despite the drought. It should be said that the herb prefers drier locations and doesn’t do well in soggy soil, but desert like conditions are a bit too extreme even for this one.

The obvious starting point for identification of St. John’s Wort are the yellow flowers, but as I show you in the video, there are other plants that bloom this time of year and also form yellow flowers. But St. John’s Wort sets itself apart with its cluster of these upright, hair-like stamens. Stamens are the male reproductive organs of the plant. They produce pollen.

The flowers have five petals which are quite notably asymmetric. Like the leaves which contain the tiny dots, the petals are dotted as well. They are contrasting dark dots along the margin of the petal.

If I understand it correctly, it’s these dots that contain the dark red pigment which gives the extracts from the plant the rich red color. The predominant color of the flower is yellow, so when you make a tea from St. John’s Wort, you expect it to also turn golden yellow. But unless you make a very weak tea, it will actually turn almost bloody red. Same with a tincture or an oil, which is often made from St. John’s Wort for various skin conditions.

The leaves are three times as long as they are wide and grow opposite each other with the next pair in 90 degree angle, so when looked at from above, they form a cross.

The stem, like I said, is very woody toward the bottom, and branches out toward the top. This way the cluster of flowers can form, which is typical of this plant.

You want to harvest the aerial parts. Some people only harvest the flowers. I follow the ages old method listed in the traditional herbal books, which recommends to harvest the upper 30 cm or so of the plant. Including the leaves and the stem.

St. John’s Wort is well noted for its antidepressant effects – many forms of nervous tensions, anxiety, sleeplessness, insomnia, even feelings of fear, or generally feeling down. Menopausal symptoms too. St. John’s Wort is great for that and the effects have been proven in clinical trials. The active ingredients apparently increase the levels of serotonin, dopamine and noradrenaline, which elevate your mood and just generally make you feel better overall.

Topically it’s used to help with sores and burns, and various skin conditions, like the eczema and even the hemorrhoids.

More than 150 different substances were found in St. John’s wort, many of which have a demonstrable biological effect. From the medical point of view, the most important medicinal compounds include naphtodiantrons (hypericin, pseudochypericin), floroglucinols (hyperforin, adhyperforin) and flavonoids. In addition, xanthones, tannins, procyanidins, phenolic compounds, anthraquinone derivatives, essential oils, etc. are also found in the herb.

St. John’s Wort has been used as a medicinal plant since the times of ancient Greece. Pedanius Dioscorides, a Greek physician and botanist living in the first century AD, called St. John’s Wort Uperikon and recommended it with honey water Sciatica and externally for burns.

In the works of Claudius Galenus, St. John’s Wort is described as a herb with the hot and dry nature. Paracelsus writes that it can be used as an amulet against enchantment and ghosts.

The herb was widely used in pre-Christian England, and from that time a number of legends have been preserved. Medieval botanist John Gerard stated that ointment from St. John’s Wort is the most valued means of healing deep injuries and that there is no better natural balm for these purposes.

Herbalists from the 16th and 17th centuries have been using the herb’s the old Latin name Fuga Daemonum, deriving it from the herb’s purported ability to drive away demons.

Niocolas Culpeper, an English botanist, a doctor and astrologer from the 17th century, assigned St. John’s Wort to a lion and the Sun House. He recommended it as a unique herb to heal wounds, treating internal injuries and bruising and dissolving swelling in the form of ointment, relieving constipation and closing the edges of the wounds together. It was also recommended against stings or bites from poisonous animals, Sciatica, epilepsy and paralysis.

St. John’s wort oil (Oleum Hyperici) is a traditional medical form of St. John’s wort. It is used for home treatment of burns, minor injuries and various skin ailments. It can also be used internally to aid with digestive disorders (dyspepsia).

When preparing at home, fresh St. John’s Wort flowers are packed into a glass jar and an oil is poured over them. Usually, olive oil is used, but I have also made it with coconut oil while the days were hot and the oil was in its liquid form.

The glass vessel housing the mixture is closed and put in the sun for several weeks. After leaching, the oil is strained to remove the solid plant matter.

The effect of sunlight during maceration leads to breakdown of hypericin that give the resulting product red color. Without the exposure to the sunlight, hypericin wouldn’t dissolve in oil. Fresh oil contains the active substance hyperforin, but its content decreases rapidly due to oxidation.

What to Be Careful About

There are some concerns that the intake of St. John’s Wort increases photosensitivity, but according to the Czech Wikipedia, you’d have to take a dose that’s multiple times higher than standard. Still, you may want to be careful, and not take St. John’s Wort if you plan to spend some time in the sun afterward. Especially if you’re fair skinned. And it may interact with certain drugs so it’s best to consult with a medical professional before taking St. John’s Wort.

I myself don’t take any pharma drugs and St. John’s Wort is a staple herb which I take on an ongoing basis without any issues. But that’s me. You should probably listen to the mainstream and do what they tell you.

7 thoughts on “All About St. John’s Wort – How to Identify + Health Benefits”