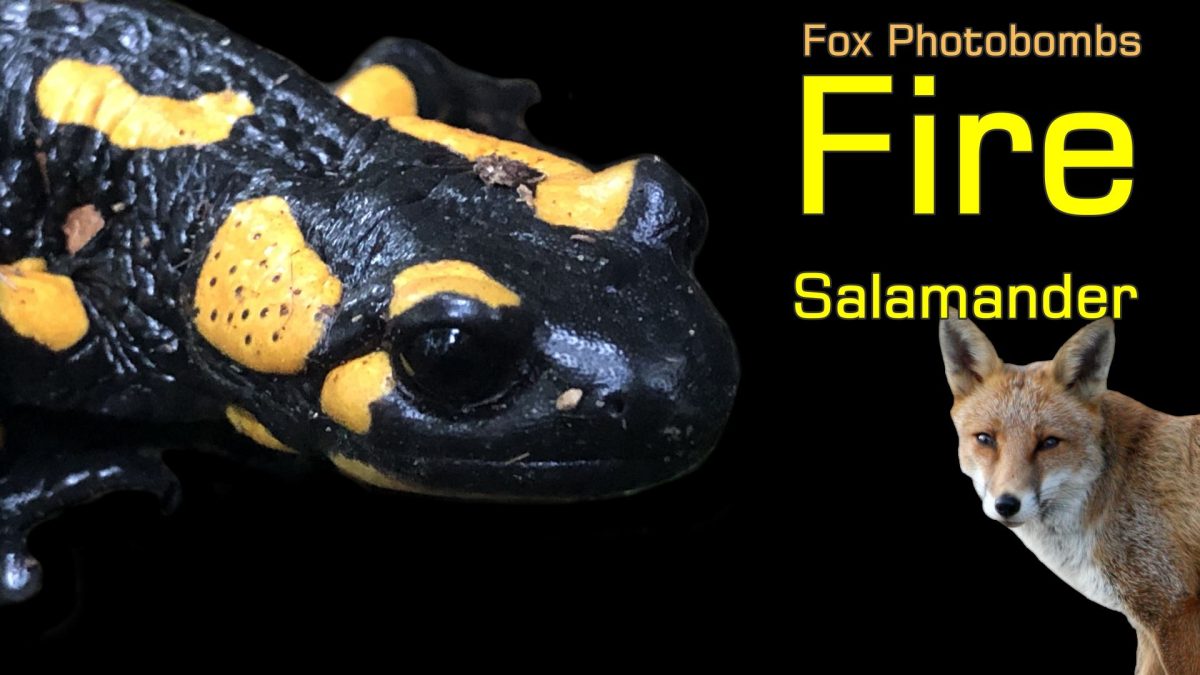 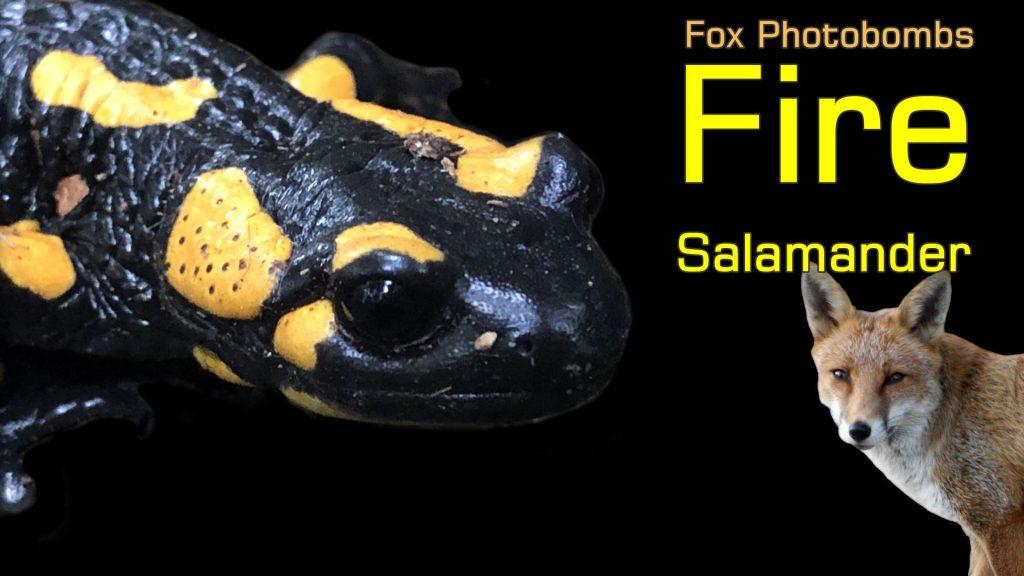 I recorded the video you’re watching in the late September of this year. It had rained whole night, but stopped before the noon and as soon as it did, I put on my rubber boots and went out for a walk. My attention was caught by a lone Fire Salamander (Salamandra Salamandra) who was resting on a fallen tree.

Fire Salamanders are quite rare to come across. They are mainly active at night and at dusk. During the day they hide under leaves, in tree trunks, in the holes in the ground or under stones, because they’re not big fans of direct sunlight. However, on rainy or moist days, they come out of their daytime hideouts and can be spotted by an attentive passerby.

Fire Salamanders are a European species. In the Americas, their closest relatives, as I understand it, are the axolotls (Ambystoma Mexicanum).

As I was readying to film this guy, my attention was diverted by a rustling sound coming out of nearby bushes. I turned around and saw a Fox. I was quiet the whole time, so the fox apparently never caught a sight of me. He just stopped to look in the opposite direction and then continued on his merry way. It would seem that despite his fine tuned senses, he never noticed I was right there.

I then got back to filming the salamander. As I just said, they are quite rare to come across, but if you do come across one, they are easy to film because they are slow moving and at least from my experience, not aggressive.

While most animals evolved to blend as much as possible with their natural environment, animals like Fire Salamanders use their colorful bodies as a dissuasive feature. It’s warning to predators that they are poisonous so it’s as if they were shouting into the environment that “yes, you can attempt to eat me because I’m neither strong nor fast so I”m easy pickings, but even though I may die as a result, so will you because I’m poisonous. So don’t mess with me if you want to live.”

While I’m not a zoologist, meaning don’t take anything I say as a fact and do your own research, this is not my first encounter with fire salamanders and I did learn a thing or two about the amphibian.

What I found out is that Fire Salamanders use a poison which contains a mixture of toxins. Its main ingredients are Samandarone and Samandarine. These are produced by the glands in their feet, in the back of their heads, and on the sides of their back and the tail.

Locations of most of their poisonous glands correspond to the yellow markings on their skin, and you can see pores through which the poison is excreted in the closeup images of the animal.

Samandarin is the most effective substance of the poison, which according to Wikipedia causes strong muscle convulsions and hypertension combined with hyperventilation in all vertebrates. Poisoning with Samandarin can cause respiratory paralysis, and eventual death.

Here in Central Europe, the encyclopedias claim their poison doesn’t really pose a major threat to healthy humans, unless it gets directly into mucous membranes, especially the eyes, where it can cause intense burning sensations. But it is potent enough to kill smaller animals, and the animals know that. Consequently, Fire Salamanders have almost no natural enemies in the wild so they don’t need the ability to camouflage or quickly hide in the presence of approaching danger.

Their greatest threats are us humans, and our encroachment upon their natural habitat along with the fragmentation of their territories. Nevermind the ongoing poisoning of rivers and creeks which are vital for their survival.

Even though Wikipedia lists the conservation status of the Fire Salamander as Least Concern, they are considered critically endangered in my part of the world, and are thus protected both by local laws, as well as the Bern Convention which declares the Fire Salamander strictly protected species.

Note Regarding Quality of Video

Because I live in the woods, I live in harmony with nature, foraging mushrooms and other wild edibles for sustenance, and filming my daily encounters on a camera.

Over the months I have collected a vast volume of videos, and my thinking was that I would process them over the winter, because in winter there is little daylight so I wouldn’t be able to spend nearly as much time in the wild, and I’d use that extra time to share what I have filmed and how I have lived with you all.

Unfortunately, after all this time videorecording, only recently did I find out that the audio recorded by my old camera is extremely poor, and the videos contain dropped frames and every few seconds it pixelates a couple of frames. It all looked fine on the camera’s screen, but after moving the files on my laptop for processing, I realized in horror that most of what I have recorded for over a year is of such terrible quality, I feel I have to make it known that I was let down by my equipment.

I realized it was this bad about a month ago. I immediately proceeded to dust off my 12 years old Canon Vixia HF200 camera and restarted using this one instead. This camera is so old, it doesn’t record in 4K or 8K or anything close to it. It doesn’t even record in Ultra HD. The best I can get out of it is partial HD in 4:3 aspect ratio. And even in that setting, because of its age, the camera frequently fails to initiate recording.

But on a plus side, when it does record, it doesn’t drop frames, doesn’t pixelate random frames and audio is actually audible. So while nowadays I use this old camera, a lot of the footage from earlier this year was recorded on another, albeit newer camera, including the footage in this video.

This is why you can’t hear any audio despite my post-processing amplification, this is why there are randomly scattered dropped and/or pixelated frames, and this is why the overall quality is poor.

Despite the shortcomings, I want to share the video with you, because it’s quite cool. I’m hoping to upgrade my filming gear when I save some funds. Until then, enjoy the chill Fire Salamander.