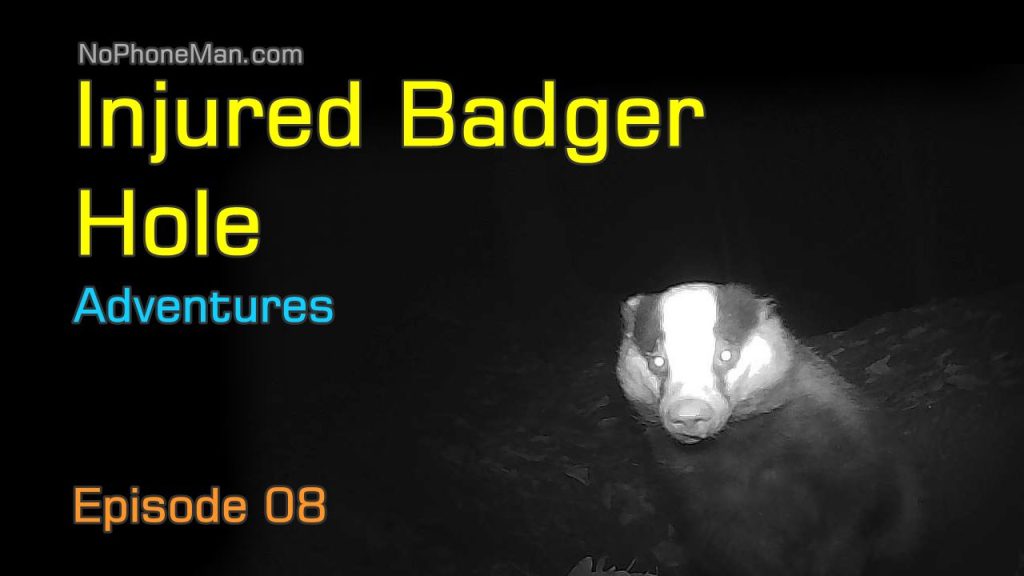 Almost two weeks into my Adventures at the Injured Badger Hole, the reality really starts to sink it – there most likely is no badger anymore. As much as it tears my heart to admit it, the chance of the furry friend having made it are next to none.

Due to his debilitating injury, the badger was starved and yet none of the food attracted him out of the hole. He’s a wild animal who’s actions are vastly dictated by his instincts. The survival instinct should drive him to get fat for the winter and not pass up on an opportunity to feed in exchange for no calorie expenditures.

He could not go out and search for food on his own, but his impeccable sense of smell should have told him there was food right outside his sett so the only rational explanation for the reason why he didn’t, is that he’s not alive anymore.

This is not the conclusion I want to draw, but I have to remain realistic. However, I am determined to keep the last spark of hope, for hope dies last, as people say where I live.

It’s probably just wishful thinking at this stage, but there is this minuscule possibility that the badger hibernated early.

Badgers don’t hibernate fully, the way bears do, but they do enter partial hibernation and are able to stay put during harsher winter days, waiting them out, to come out when the conditions improve.

In order to do that, they deliberately overeat in fall in order to have enough fat reserves to spend an unforeseen amount of time in their sett should a cold spell hit the land.

Perhaps the injured badger went into his partial hibernation early, trying to last as much as he can on the limited fat reserves that he had been able to accumulate, even if it means that he will have to be more active over the cold winter months. Doing it this way would still give him a better chance of surviving, provided his injured paw to heal during the early hibernation.

Episode Eight of My Adventures at the Injured Badger Hole consists of day 10, day 11 and day 12 at the sett.

Day 10 at the Injured Badger Hole

Day 10 at the Injured Badger Hole started with Woodpecker Decker greeting me from the same tree as the day before.

Wood rats, who so far have been the only beneficiaries of the food I brought for the badger, are now forced to look for their own food again, because after realizing that I’m just feeding the rats, I stopped bringing more food.

The rat feast may seem to be over, but the rodents are still coming out on top. The network of tunnels dug up by the badger are now to become the new rat kingdom. Much like the first sett I found, which also has nothing but a bunch of rats living in it. What happened to the badger who made it – I have no idea. By the time I discovered the sett, there was no badger living there anymore, and the whole sett was taken over by the rats.

Day 11 at the Injured Badger Hole

Decker greeted me on Day 11 shortly after entering the forest. That’s really the border of his territory, as he seldom flies further than that. I was surprised by that, but he did the same the following day. However in the distance, I could hear another woodpecker pecking, but that one could peck much faster than Decker – he sounded like a machine gun. Decker doesn’t sound like that when pecking. The machine gun sound eventually went away before I spotted the bird making it.

Decker followed me to the badger hole and because the sun came out, I was able to capture a video of him which nicely shows his colorful feathers. Oftentimes all my camera can capture is a silhouette of him, because he instinctively stays high up in trees to avoid predatory foxes, and the cloudy sky creates strong backlight without illuminating the bird.

Day 12 at the Injured Badger Hole

On day 12 I walked up a meadow which in warmer months, is full of healing herbs and wild flowers. A trio of roe deer was feeding on the meadow, but it was not the Chill Deer Trio. They took off and ran toward the forest as soon as they saw me.

It was so far the coldest day of the season, with temperatures dipping to negative six degrees Celsius. Decker greeted me from the same pine tree as on Day 11.

Despite the freeze, a steam was rising from the fallen leaves by one of the emergency exits made by the injured badger. That was quite the sight and I tried to capture it on camera, but the equipment I have is not the greatest so even though it did capture the steam a little bit, it doesn’t look as good as it did to my naked eyes.

Sound of people cutting down trees in the distance with a chainsaw was causing disturbance through the forest. I was certainly disturbed by it, and so was Decker. It wasn’t from within the boundaries of the forest which I use, but I still don’t like the idea of the animal habitat getting fragmented or destroyed. The animals roam freely across borders and human ownership lines, so regardless of whose land is getting deforested, at the end of the day it harms the wildlife.

Because there is no badger anymore, I shrunk the compilation of the trail camera videos to just about 30 seconds. It’s really just rats that roam about, and we’ve seen plenty of them in the series, so I kept it short and sweet, focusing on showcasing the rats chewing on the cardboard food box, now that there is no new food being brought in.

The music used for the trail cam footage is a guitar solo performed by me. It’s my rendition of Johann Sebastian Bach’s Toccata and Fugue in D minor. The solo was recorded live in 1996 in front of a live audience. There is no studio recording of it.

The episode ends with a video of a fly I spotted sitting on a tree that day. Because it was -6 degrees Celsius outside, I was quite surprised by the sight of a cold blooded insect chilling out in the open. Expectedly, the fly could not fly away because of how cold it was outside, but it was not dead and did move when touched. I’m not sure why the flu was there nor what happened with it after I left.

Despite the chances of the badger being still alive are non existent, I am determined to keep visiting his sett and checking the trail camera for possible proof that by some miracle, he may have survived. But time may have to come, when I simply have to face reality and move on. Nature can be cruel, but that’s the way it goes.

2 thoughts on “My Adventures at Injured Badger Hole – Episode 08”