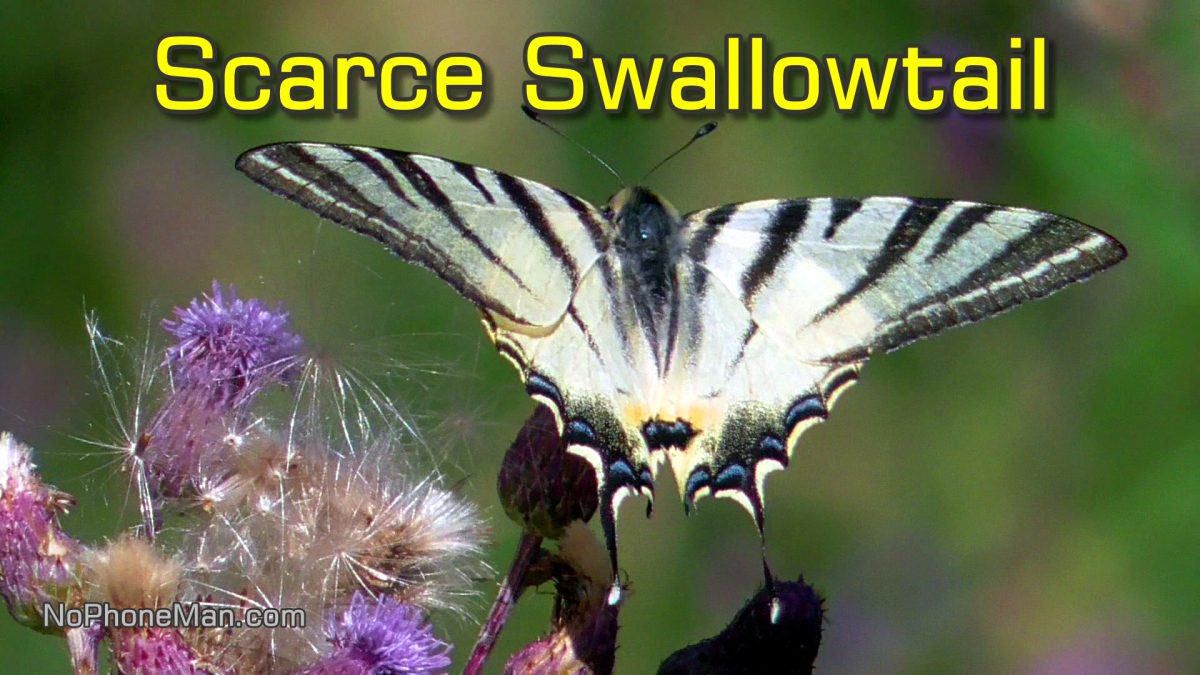 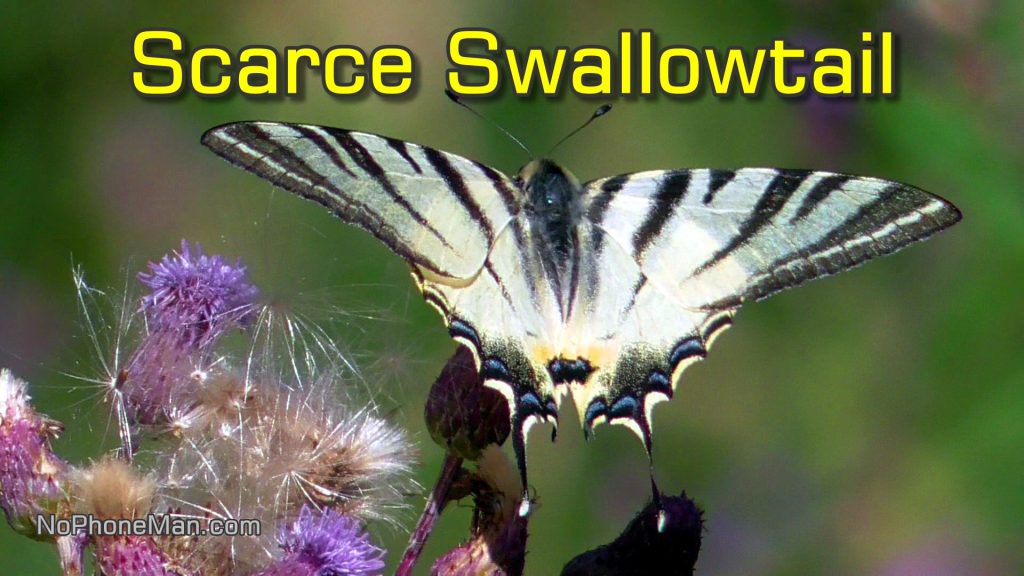 The Scarce Swallowtail (Iphiclides Podalirius) is one of the largest butterflies in Central Europe. It was once quite bountiful, but is getting rarer and rarer.

This year is a severe drought year, but despite the growing scarcity of the Scarce Swallowtail, I see them from time to time on the meadows.

On my latest run in with the butterflies, I decided to film them. Unfortunately, it turned out to be a windy day so the butterflies were being tossed around as the plants they pollinated swayed with the breeze.

Unfortunately for me who was trying to videotape the butterflies, the Field Thistle is fairly drought resistant so despite the extreme dryness of the soil, it grows quite tall, taller than other plants. That made the plant more exposed to the wind and as a result, it swung more vigorously.

With the Swallowtails sitting on the flowers atop Field Thistles, they were in a constant state of motion so I never had a nice, stable shot.

And because it was so windy, the wind caused a widow-maker in the wood to rub against the beach tree it leans on and that made the loud creaking sound heard throughout the video. I decided to go to the widowmaker after I was done filming the Swallowtails to also introduce the iconic tree of my woods, whose creaks already made it on one of the videos – the video about the Slugs, a Dor Beetle and a Fire Salamander coming out of their hideouts after an early spring rain.

Sadly, that was one of the last rains of this year so far. The creaking in the previous video takes place while I film the Black Slug at the end of the video

As is quite obvious, the Swallowtail butterflies get their name from the resemblance to the Swallows’ tails. I made a video about Swallows before, though it focuses mostly on the vibrant colors of their plumage when viewed from above. You can see their tails in the video, though.

The Swallowtail inhabits warm areas, mainly southern slopes covered with shrubbery. Because of its scarcity and the vulnerable status, it is protected by law in many Central European countries. However in Greece, which is a country I visited before, they seemed to have been quite abundant there, and also seemed larger to me than what I see here.

The base color of the Scarce Swallowtail is pale yellow. The length of the front wings is about 4 cm. The first generation of the year has an orange stripe on the hind wings.

The female Scarce Swallowtail is slightly larger than the male. The caterpillars live from June to August mostly on the Blackthorn (Prunus Spinosa), but also on other Prunus species (cherries) and sometimes on different fruit trees. The caterpillars are light green with a low-lying white strip that stretches from head to the end.

Field Thistle (Cirsium Arvense) is a perennial, dioecious (male and female plants are separate), spiny plant blooming in the summer with multiple pink/violet flowers on the branched top. It is considered to be one of the most difficult to liquidate weeds in many countries, where it is known for its strongly invasive behavior.

Despite all the hate that Field Thistle gets, it’s an edible plant so to me, it’s a usable plant to know. Pretty much all parts of the plant are edible, however being a Cirsium species, the plant is covered with thorny spines the removal of which can be a pain.

The root of the plant is said to be the most nutritious and the easiest to deal with, as it’s not thorny, but you’d have to dig it out. The stem would be the second easiest as the concentration of thorns is not as high. The leaves are next, but they are quite rich in thorns so it’d take a lot of work to remove them all for the leaf to be palatable. The flowers are probably best left for the butterflies.

The second part of the video is about the creaking widowmaker. It is a large pine tree that succumbed to the wood rot and fell. However the fall was stopped by a nearby living Beech tree – the old pine now leans on the Beech.

When the wind blows, the Beech sways with the wind and the heavy pine that leans on it rubs itself against its bark. Not only does the rubbing scratch the Beech’s bark off, but it causes the loud creak which can be heard far and wide.

The creaking is truly loud and often scary.
Nothing short of sound effects from a horror movie. The trees sometimes creak like hell when I least expect it. I got used to it now, but from the beginning, especially when I was not near the trees, I had no idea what it was and all kinds of thoughts crossed my mind.

My palm camera doesn’t have an external microphone with the option to set the audio levels on manual, and its automatic settings compensates for spikes in volume. As a result, the video doesn’t give true justice to the loudness of the creaking.

Nevertheless, I hope you enjoy the video and I see you in the next one…